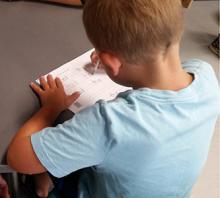 Even pushing into a more technological age of swiping and typing, the ability to manipulate a stick over a piece of paper is still a necessary life skill. And it’s one Creighton Pediatric Therapy is trying to help more children master. At its West Omaha clinic, Creighton Pediatric Therapy hosts two handwriting camps annually, helping kids in kindergarten through fourth grade get a better grip on putting pencil to paper.

The camps, in addition to concentrating on giving children pointers and drills to practice in direct support of their handwriting, also focuses on other ways to help improve a child’s confidence with writing. “Creighton Pediatric Therapy’s vision is to empower families and children to overcome and achieve and the handwriting camp is a crucial component of that vision,” said Kelly Nelson, DPT, director of Creighton Pediatric Therapy.

To gain that strength and assurance, students write with instruments large and small, they write on walls and mirrors and chalkboards, they write in shaving cream and sometimes on sandpaper. “We make this as multi-sensory as we can,” said Anna Domina, OTD’04, an occupational therapist at the clinic who helps administer the camps. “We use different surfaces, different media. We emphasize there are different experiences in writing and handwriting is still among the primary things children do in school and they use it in different settings. Whether you’re doing math or spelling, handwriting is a crucial component.”

Then, there’s yoga. Each session of the handwriting camp gives a basic introduction to campers of the ancient practice and its holistic benefits — including handwriting. “Besides stretching and strengthening, yoga helps with anxiety,” Glazer said. “It provides a calming and a centering. It gives the children a chance to become more attentive in their writing.” Andrea Borland, a student in the Department of Occupational Therapy, assisted at the camp this summer and said her own experience, side by side with the campers, has been a two-part blossoming. “The way we’ve structured the camp to make it always adaptable to the kids’ perspective has been great to be a part of,” Borland said. “It’s been great to see how they’ve opened up and how they’ve strengthened themselves, physically and with their confidence. They go back to school with some realization that they can do this.”

This summer, the camp has been in full swing for about two weeks. The theme for the summer session is Movin’ and Groovin’ the Write Way, with an emphasis of movin’ and groovin’, given the activities aimed at making it easy to pick up a pencil and to break any handwriting fears by getting and staying in motion.

Two students, Luke Freeman and Maddie Weis, both about to enter first grade, said they’ve learned a lot about handwriting, yes, but even more about how to stay calm and trust that, when called upon to put pencil to paper, it’ll be second nature to just start writing away. “I learned a lot by doing the yoga poses,” Luke said. “It makes me think about what I can do when I write.” For Maddie, getting to write on sandpaper and whiteboard walls has been a huge thrill.
Her favorite thing, though? “Writing the letter M,” she said. “Because it’s the first letter in my name!” Another handwriting camps is forming for the fall. To learn more about Creighton Pediatric Therapy’s handwriting camp and other programs, visit the website here.