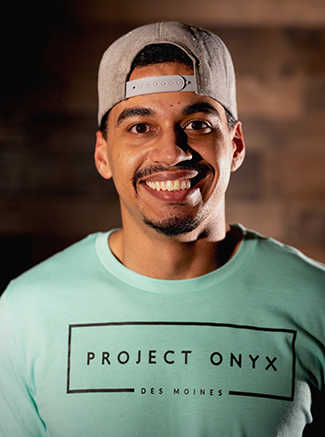 Twice a week, 10 to 15 boys between 14 and 18 years old, drawn from underserved minority populations, gather at a gym for a workout and for what might be called a think-out.

Greeting them as they walk through the door is Patrick Ford, a biracial Chicago native who graduated from Creighton University in 2018 with a Doctor of Physical Therapy degree. Alongside is Elijah Muhammad, owner of Unorthodox Fitness gym in Grimes, Iowa, husband, father of four, CrossFit Games athlete and a former strength and conditioning coach at Tennessee Tech University.

Together, the two men are building a youth program designed not just to confer physical fitness on boys and girls but also to support young Black, Indigenous People of Color (BIPOC) as they surmount the special obstacles that lingering racism places in their way.

A physical therapist by day with Kinetic Edge, one of Iowa’s fastest growing physical therapy rehabilitation companies, Ford deals professionally with a full range of sports-related injuries as well as general orthopedics.

By night, however, as one of two founders of the nonprofit Project Onyx, which seeks to eliminate financial and other barriers to fitness, health and mentorship services faced by communities of color, Ford fights a different battle. Within Project Onyx is a free program titled Empowered Youth Program, and it is here that Ford and Muhammad strive to inspire youth to fulfill their potential, even to the extent of pursuing professional careers.

Ford’s work building the Empowered Youth Program earned him the “Iowan of the Week” award Feb. 5, conferred by U.S. Rep. Cindy Axne, D-Iowa, and announced in a speech before the U.S. House of Representatives.

“I commend Patrick for beginning to address the important work of breaking barriers and creating an avenue for BIPOC to be brought into the field of health and wellness,” Axne said. “By providing this service to the community and expanding the reach of Project Onyx, many young people from across Central Iowa will be given the opportunity to make our state more inclusive and result in better outcomes for all, regardless of race.”

Ford says each session begins with a conversation designed to identify the emotional and mental well-being of the participant and to discuss any challenges they are confronting.

“Sometimes, it’s a lighter conversation, sometimes it’s a more serious conversation, especially regarding race and racism and the challenges that people of color face,” Ford says. “That can last 20 minutes, it could last 30 minutes, it might end up being the whole session, but it’s important that we get a good sense of where people are.”

“We will discuss how to have difficult conversations with people who disagree with you, for example,” he says. “The goal is to build a better understanding of how to approach life with its different challenges and how to develop their own independence, how to control their health, their emotions and their mindset.”

Beyond that, Ford says, Project Onyx’s Empowered Youth Program is looking to the future.

“Beginning in March we will begin a formal mentorship program where we will take some of the kids in our Empowered Youth Program and see which ones are interested in pursuing careers in health and fitness,” he says.

“Then we will pair them with a mentor who is a professional in that field who can get them more information about it, stoke their interest a little bit further, and then get them some real life experience through shadowing or observation so that they can see these different careers in action.”

To that will be added the opportunity to lead Empowered Youth Program sessions — a further strengthening of the conviction that they can embrace leadership roles.

“The whole idea is representation,” Ford says. “If we can get more people of color, more Black Americans, more Mexican Americans — you name it — in front of the diverse communities where we live, then we can help eradicate racism and racial health disparities simply by getting more people who look like us into the professions that we like and appreciate.”

Project Onyx can be found at projectonyxdsm.com.