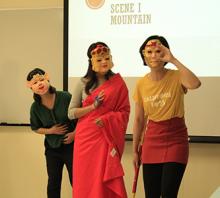 Monkey business has a whole different context in China this year.

2016, this Year of the Monkey, is a most auspicious one in the tradition of the Chinese zodiac. Wednesday, June 22, a group of students from Nanjing Medical University explained why during the first of five presentations in Chinese culture being delivered by occupational therapy and physical therapy students from five Chinese universities. The visitors are studying at Creighton University for the summer as part of an exchange program with the School of Pharmacy and Health Professions. “Tell a person your zodiac animal and they can tell a lot about you,” said Hazel Bian, a student from Nanjing Medical University who led the presentation. “In China, it’s a polite way of asking your age and, in revealing your zodiac sign, you will be evaluated. People will judge how fortunate or misfortunate you are, what your personality is like and what your career prospects might be.”

The monkey, in the Chinese zodiac, is renowned for its cleverness, curiosity and capaciousness and, as a consequence, it’s a highly-prized sign under which to be born, Bian said.
But not quite the most propitious one. That would be the dragon. And in 2012, the last Year of the Dragon, China experienced a 5 percent bump in its birthrate, roughly equal to 1 million more babies.

On the other hand, the hapless goat, whose year was observed in 2015, resulted in a large number of Chinese women seeking Caesarean section procedures to get their babies born before the unlucky ovine reigned. “The zodiac can affect many things,” Bian said. “How you are named, what your marriage will be like. People still think of these things.” To round out the presentation, the students from Nanjing Medical University performed a brief play about one of China’s more recognizable monkey heroes, the Monkey King. The script was adapted by Bian from a popular Chinese television show which was, in turn, based on a 16th century novel, Journey to the West, which follows the wiles of the Monkey King and his patron, an immortal monk.

In the show and the novel, the heroes are often pursued by dark forces bent on attempting to wrest from the monk a little immortality for themselves.In Bian’s version, the Monkey King — despite the demurrals and protests of his companions, including the monk — is able to unmask a marauding demon three times and thereby save his patron’s life.

“There’s no one in China who hasn’t seen this show,” Bian said. “And everyone loves it.” The erstwhile thespians received commensurate adulation from the Creighton audience.

In the weeks to come, more programs from the visiting students will be taking place around campus, each putting a particular flavor to Chinese culture. June 30 at noon in Room G10 of the Bio-Information Center, students from Shanghai University of Traditional Chinese Medicine will give a demonstration of traditional Chinese approaches to rehabilitation science. Attendees are encouraged to bring and eat lunch during the presentation.