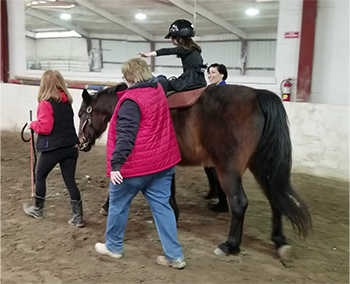 If dogs are considered man’s best friend, then what of the horse, whose history of service to humanity is long and storied?

The latest report from the Centers for Disease Control and Prevention states that one in 54 children are currently being diagnosed with ASD and is four times more prevalent in boys than girls.

Anastasia Kyvelidou, PhD, assistant professor of physical therapy at Creighton’s School of Pharmacy and Health Professions, has been awarded a two-year National Institutes of Health grant worth $150,000. The purpose is to try to understand why riding horses improves the social and adaptive behaviors of children with autism. That “hippotherapy” (as horse therapy is known) helps is attested by an established body of evidence. Why it does, is the riddle Kyvelidou and her fellow Creighton researchers have been tasked with unravelling.

Kyvelidou, who is the study’s lead investigator, is assisted by co-investigators HETRA, Dimitrios Katsavelis, PhD, associate professor in the Department of Exercise Science and Pre-Health Professions at Creighton, and Kirk Peck, PhD, chair of the Physical Therapy Department at the Creighton School of Pharmacy and Health Professions.

The study would already have been underway but for the COVID-19 outbreak, but Kyvelidou said she hopes it will begin in the near future.

“There is a lot of evidence suggesting that kids with autism, but also with cerebral palsy, improve in terms of how they walk, in terms of social behavior and adaptive behavior, but we don’t understand why,” Kyvelidou says.

Some suggest that the child is stimulated in some way by the horse, others that the temperature of the horse affects the child, still others that the synchronicity of movement between horse and rider effects positive change. No one knows for sure.

“That’s why this project got funded through the NIH, because we are proposing a new method to assess the therapy,” Kyvelidou says.

It’s an easy fit for Kyvelidou, whose teaching includes theories of motor control and how people learn.

Thirty children will be involved, both with autism and with no developmental disability. They will be divided into two equal groups of 15 with children matched by age to ensure proper comparison. The study will last six weeks, composed of one 30- to 45-minute hippotherapy session a week. During three of the six sessions, the children and the horses will carry various sensors designed to monitor reactions.

Parents will be asked to fill out questionnaires concerning improvements they see.

The goal of the study, Kyvelidou says, is to unravel the mystery of why horse riding improves the lives of autistic children. If that puzzle can be solved, new therapies could be devised.

“The goal is to improve positive characteristics in the lives of these children,” Kyvelidou says. “Maybe through treatment we can focus more on positive behaviors and help them improve how they function and so improve their quality of life.”

The number of children involved in the study means the Creighton researchers will lean heavily on hippotherapy expertise possessed by HETRA staff.

Edye Godden, BS’91, chief executive officer of HETRA, and Katherine Smith, both of whom are occupational therapists, will guide the treatment the children receive.

“One of the things that’s been so interesting for us is that they want to study the effect of the horse on the rider at the same time as they are studying the effect of the rider on the horse,” Smith says. “It’s really interesting to see how the movement of the horse is transferred to the person who’s riding. We don’t know why that seems to work, but it seems to give these folks a more normal sensory experience.”

The merging of Creighton and HETRA resources in pursuit of the study flowed from an established relationship between the academy and the University, Smith says.

She says the relationship began when Peck was working with Allison Harrison, PT, who was earning a certificate in providing physical therapy to horses. Already an expert in hippotherapy, Harrison worked with Peck to develop specialized treatments for HETRA horses.

“He saw how much care we took to treat horses to improve their movement pattern, because the more normal a horse’s movement is the better experience the rider has,” Smith says. “If their movement is asymmetrical, then the rider will feel that, and that is not what we want.

“We are really glad to have that connection with Creighton.”