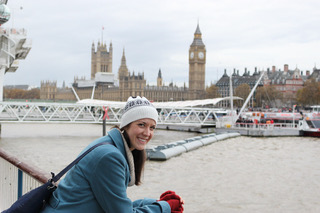 Andrea Millea, DPT ’13, has been working as a physiotherapist in London since the summer of 2016. Millea moved to London due to a residency program her spouse was offered, and was able to put her own degree to work in the United Kingdom. “Working here has given me a much broader view of global health, seeing the pros and cons of a very different health-care system and education process,” Millea says.

After receiving a license to practice in the UK, Millea worked a temporary job at a local hospital, then took on a role as a rotational pediatric physiotherapist at Chelsea & Westminster Hospital. She spent three days a week seeing children in the hospital and two days a week in a school for children with “profound and multiple learning disabilities.” “All that I learned through Creighton’s example taught me to embrace the differences of international cultures – to keep an open mind, open dialogue and an open heart in order to learn about a different approach to health care,” Millea says.

It is common for physiotherapists in the UK to rotate roles and settings early in their careers, and Millea now splits her time between inpatient pediatrics and in a pediatric musculoskeletal outpatient clinic. Millea says it has been interesting learning about physiotherapy in England – “from the differences in the education and training system, to the provision of health care for everyone through the National Health Service, to the difference in the culture of work-life balance compared to the U.S.”

The experience has also given Millea a greater “cultural competency,” she says, and a better understanding of the challenges that immigrants face in general. Working abroad was not necessarily a new concept for Millea, who spent her last clinical rotation of her physical therapy program in the Dominican Republic through Encuentro Dominicana. The experience further stoked her growing interest in global health care.

Millea says the Jesuit values that were instilled in her during her time at Creighton shaped her views on the politics and ethics of health care and have made her current work possible. “The value of magis certainly led my husband and I to make the huge life choice to move overseas and begin our married life together in a foreign place,” she says. “We knew that this challenge would lead us to be ‘more’ than we ever imagined we could be.”

Millea and her husband were granted an extension to remain in London an extra year and are set to stay until summer 2019.