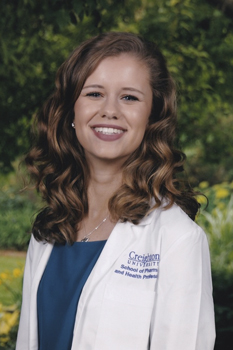 The Cora Mae Briggs Memorial Scholarship is given annually to a Nebraska resident who is a pharmacy student at Creighton and exhibits high academic and professional potential.

Being the first in her family to pursue a career in health care, Moritz knew she was entering uncharted territory. Pursuing a career in pharmacy had almost always been on her radar. She was drawn to having  a significant impact on a patient’s experience in the health care system and simultaneously incorporating her interests in chemistry and physiology.

As she approaches graduation, she says she knows she has chosen the right career path. Being a fourth-year student on rotations, she has been exposed to many areas of pharmacy and has found many aligned passions. In the last four years, she has spent a lot of free time working at a community pharmacy in her hometown, where she was able to establish close relationships with many recurring patients and learning from some of the best pharmacists.

Her favorite parts of community pharmacy are offering expanded immunizations to her patients and spreading the word about the importance of vaccination. She has also become involved with Student Society of Health-System Pharmacists (SSHP), Nebraska Pharmacy Association (NPA), Rho Chi, and the American Pharmacists Association – Academy of Student Pharmacists (APhA-ASP). Her work with APhA allowed her to be  more involved in immunizations, offering influenza vaccines to Creighton students, faculty and other groups in the Omaha metro area.

In the last year, she had an article, “Updates in the Treatment of Postmenopausal Osteoporosis,” published in U.S. Pharmacist and presented on one of the Top 10 New Drugs of 2019 at the NPA annual meeting in Lincoln. Following graduation, she plans to pursue a residency next year and ultimately become a clinical pharmacist at an academic medical center. As a life-long Omaha resident, she is honored to receive the Cora Mae Briggs scholarship from the Foundation: “I am so thankful for the investment in my education and the opportunity to continue my passion for the career of pharmacy.” 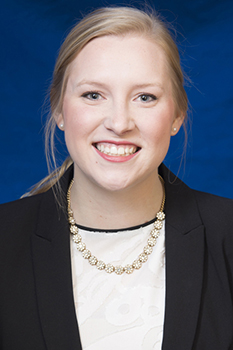 The Rex Higley Memorial Scholarship is given to a Nebraska pharmacy student who shows academic and professional potential.

Heady’s path to pharmacy began with her first chemistry course in high school. She enjoyed a class that most of her peers despised, and for the first time, considered a future as a health care professional. After researching several options, she decided that her personal strengths and future goals aligned best with pursuing a career as a pharmacist. She knew  pharmacists were approachable, helpful and trustworthy, and she wanted to be a resource for her community. It was especially appealing to  work directly with patients and use her education to help others improve their health outcomes.

As an undergraduate at Kansas State University, she worked as a pharmacy technician at the student health center. She began with a blank resumé and had no clue what a “script” was, but her passion for community pharmacy began to unfold. She learned the significance of counseling effectively from the strong examples set by the excellent pharmacists she worked with, and she found it reaffirming that interacting with patients was indeed her favorite part of the job. When she had opportunities to shadow clinical pharmacists in a hospital setting, her eyes were opened to a realm of pharmacy she had not yet considered. These experiences allowed her to enter into pharmacy school with an open mind about how she wanted to practice pharmacy after graduation.

Through her educational courses, her IPPE and APPE experiences, and her involvement in APhA-ASP, Phi Lambda Sigma and Kappa Psi, she has found a deeper appreciation for the impact pharmacists can make in all areas of practice. Now that graduation is rapidly approaching, she confidently says she has found her calling in community pharmacy: “I am passionate about medication education and empowering patients to be advocates and participants in their own care. I know that patients are best equipped for success when they understand not only the instructions but also the indications for their medications, and I believe in treating each patient as I would want my family members to be cared for.”

Heady adds: “I value the opportunity to form close relationships with patients and be the first line of defense in assessing for barriers that may prevent them from optimizing their medication therapy. I am so glad that I decided to come to Nebraska for my pharmacy education. I am honored to be chosen as a Nebraska Pharmacy Foundation Rex Higley Scholarship recipient, and I am so grateful to the NPA for their support of future pharmacists such as myself.”

Read the news for our Pharmacy departments.