Katie Phelps from Callaway, Nebraska, bleeds blue. It’s the color of her favorite basketball teams, the nearby South Loup High School Bearcats and Creighton Bluejays. So, when her mother, Lana, found out about the Creighton Abilities Basketball Camp, it was a no-brainer to make the four-hour drive to Omaha.

On June 14, Katie was able to play basketball with some of her favorite Bluejay basketball student-athletes. Katie, who has Down syndrome, was one of 33 children ages 5-12 to participate at the camp for children with special needs. The second annual Creighton Abilities Camp brought physical therapy students and student-athletes together to provide a memorable morning for children in the community.

Each child is paired with a third-year physical therapy student. The students receive information about their camper and are in touch with the family prior to the camp, so they be best prepared for the day.

“They get to use their education and training to be successful,” Jessica Niski, PT, DPT, assistant professor of physical therapy, says. “It’s a fun way to show off all the things we do at Creighton and exemplifies our Jesuit values.”

Together, the children and physical therapy students participate in stations staffed by student-athletes – focused on dribbling, shooting, passing and layups.

“We see what they can do,” Davion Mintz, a senior guard from Charlotte, North Carolina, says. “Each of them has a special gift. Each one can do something different.” 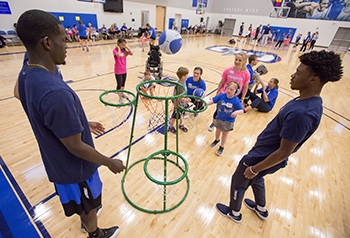 It’s something Mintz has seen within his own family as well. His second cousin has Down syndrome. “It’s normal for me; she interacts the same.”

“Kids are a lot of fun, they’re just like us,” Alexander says. “Why not give them the opportunity to come out and do what we do every day?”

The idea for the camp came from Butler University, which runs a similar camp. Officials there reached out to Creighton’s physical therapy and men’s basketball programs looking to expand the program. After a successful inauguration last year, the camp welcomed children from all over, many returning for a second year. 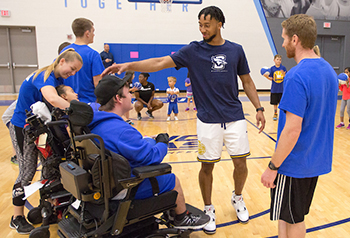 “It gives kids with special needs an opportunity to have a basketball camp just like every other kid,” Lisa Black, PT, DPT, professor of physical therapy and director of clinical education, says.

A large part of physical therapy is learning how to modify exercises to fit the individual. During the camp, children used special baskets at their height.

“It’s really cool to show people what they can do. Everybody has abilities,” Jessica Sved, a third-year physical therapy student from Langley, Washington, says. 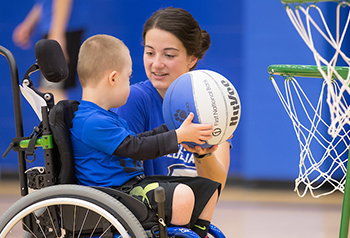 Some children needed a hand to reach the big baskets — so Bluejay basketball players lifted them up to give them that slam dunk.

“Kids with special needs don’t get to play every day. They don’t get to go to camp,” Jenn Shannon, mother of 10-year-old Brady from Omaha, says.

When Shannon told Brady that he would be attending the camp last year, he was excited to play with the “big kids,” especially college players. The family returned again this year.

After an engaging morning of stations and relay races, the camp concluded with a tour of the men’s basketball locker room.

“It’s a blessing to give back,” Alexander says.