Charles Curtis (Curt) Barr, RP, BSPHA’74, PharmD, recently received the Distinguished Alumni Service Citation from the School of Pharmacy and Health Professions for making a lasting contribution to his profession, his community and his alma mater.

He has served as associate professor of pharmacy practice, assistant dean for alumni relations and associate chaplain. He is a highly respected clinician and educator with expertise in medication therapy management, compounding and addictive substances prevention.

Barr earned his BS in biology from Wayne State College (1970), his BS in pharmacy at Creighton (1974), and his PharmD from the University of Nebraska College of Pharmacy (1981). While a student, his passion for patients, entrepreneurial spirit and commitment to service were encouraged by the Creighton faculty and alumni who mentored him. As his 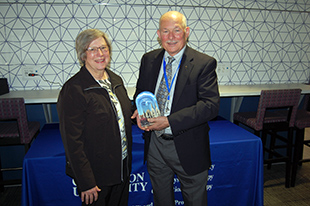 pharmacy practice and businesses grew, he became increasingly involved in his profession and served as past-president of the Nebraska Pharmacist Association, Nebraska Board of Pharmacy and American Pharmacist Association Foundation and was awarded National Preceptor of the Year, Outstanding Independent Drugstore, Bowl of Hygeia, Innovative Practitioner Award, and National Association of Boards of Pharmacy Honorary President.

Barr next dedicated himself to serving future generations of pharmacists by joining the Creighton pharmacy faculty in 1998. He was soon tapped by Dean J. Chris Bradberry to restructure the Dean’s Alumni Advisory Board. Under his leadership, the board established and endowed the Alumni Centennial Scholarship fund.

Barr has always remained in touch with his patients, customers, students and Creighton University. Born and raised in Tilden, Nebraska, he learned the importance of helping people from the town doctor – his father. He found his calling in pharmacy, where he uses his many strengths to help people improve their well-being. Barr credits his wife, Vicki, and God for his success. He is a Stephen Minister and active member of Christ Lutheran Church, plus many community organizations including the Blair Rotary Club and LiveWise-40.