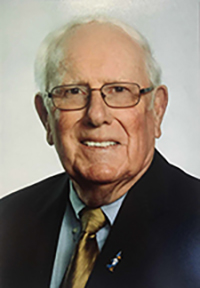 The Creighton University Alumni Merit Award recognizes outstanding alumni from each school and college. These passionate leaders touch and enrich lives, encouraging and inspiring others while they serve selflessly, making a difference in their communities and leaving the world a better place.

Before beginning his professional education in the School of Pharmacy and Health Professions, Doug Ford had already made a name for himself in the field of pharmacy. At age 14, Ford went to work at the Nemec Pharmacy in Omaha, where he filled prescriptions and gained valuable knowledge from owner and Creighton alumnus, Richard Nemec, BSPHA’41.

Ford graduated from the pharmacy program in 1969 and became a full-time pharmacist for Walgreens. To Ford, being a pharmacist was always about more than pouring, counting and filling prescriptions. He fondly recalls the positive impact several faculty members, including Dr. Salvatore Greco, Dr. James Crampton, Dr. Ann Langely Czerwinski, Professor Sebastian Pirruccello and Dr. Allen Schlesinger, had on his academic experience at Creighton.

Ford applied the values of his Jesuit education into his work, to provide meaningful counsel to his patients. He eventually transferred his counseling skills to his role as a district manager of Walgreens. For 24 years, Ford provided leadership to more than 500 employees in 30 regional stores in Milwaukee.

For more than 50 years, Ford has remained engaged with Creighton University. He is determined to support the dreams of future pharmacists, and in 2002, Doug and his wife, Barbara, established the M. Douglas and Barbara Ford Endowed Scholarship. He also provides recruiting efforts to Milwaukee area students interested in Creighton. Ford is a loyal philanthropic supporter of the School of Pharmacy and Health Professions, and from 2007 to 2010 he faithfully served on the National Alumni Board. He continues to dedicate his time to the Milwaukee Alumni Club.

Read the news for our Pharmacy departments.